Chiropractors define a VSC (referred to as a ‘subluxation’) as the functional misalignment of a vertebra or the limited mobility of its facet joints.

If a subluxation exists, the animal loses normal flexibility of its spine, affecting performance and resulting in stiffness and muscular tension.

Reduced mobility between two vertebrae can affect the nerves that leave the spinal cord between these adjacent vertebrae.

Negative alteration in the nerve’s function can lead to interference in the flow of stimuli or information, which is necessary for smooth coordination of body functions and muscle contractions.

Every movement, from a slight twitch of the tail to the complicated piaffe in dressage is made possible by synchronizing many muscles. If the function of the nerve fibers, which innervate these muscles, is altered, co-ordination deteriorates.

Small disturbances are usually only caused by a slight interference; however, they can keep the animal from performing at its best in daily routine as well as in demanding exercises.

Mis-steps resulting from lack of coordination may cause injury to other joints and tendons or ligaments in the legs.

An animal with a subluxation will change its posture to compensate for the restricted mobility of its spine and to avoid pain. This triggers increased mechanical strain on other parts of the spine and extremity joints, causing secondary restrictions and deterioration of the condition. 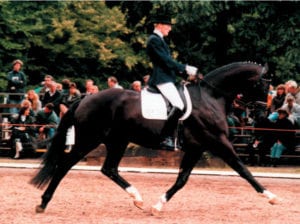